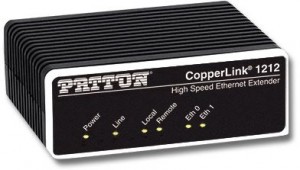 The Patton Electronics CL1211 and CL1212 are 168 Mbps Ethernet Extenders.  The CL1211 has one Ethernet Port (the CL1212 has two Ethernet ports).   (Click the image to enlarged view of typical application) 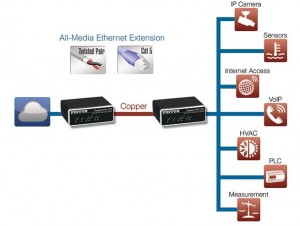 Industrial Grade, Extended Temperature, and Conformal Coated units (for humidity) are also available in the single ethernet port product line.  They look just like this image of the CL1212, only they have a single Ethernet port, rather than two: 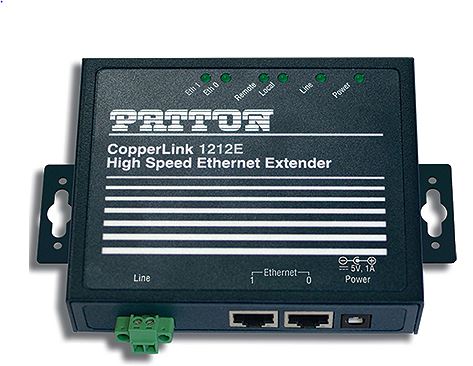 Combining data flows from up to 2 network-enabled devices onto a single twisted pair or coax cable, the CopperLink Model CL1212 can deliver IP traffic up to 1.8 miles (3 km) away—well beyond the standard 328-foot (100-meter) Ethernet distance limitation.

With achievable line rates up to 168 Mbps, the CL1211 eliminates the bandwidth constraints commonly experienced with other copper-based transmission technologies. The Model 1211 is engineered to re-use existing infrastructure previously employed in such legacy applications as alarm circuits, E1/T1 circuits, RS-232, RS-422, RS-485, CCTV and CATV. Many newer cabling standards are also supported, including Cat 5e, Cat 6 and Cat 7.

Most Patton Extenders come with either 2 or 4 Ethernet Ports on a built-in switch.  The CopperLink Model CL1211 is ideal for applications requiring the enhanced security of a single Ethernet port.