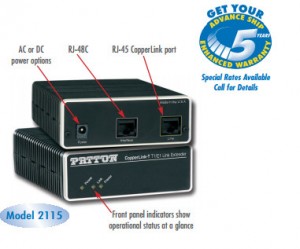 Patton Electronics’ popular CopperLink 2113 / 2115 E1 T1 Extender products have reached end of life.  We may have new or refurbished Patton or Black Box branded units still in stock.   Contact us to check.

We now recommend that our customers consider the Data Connect Copper-T units for extending T1 and E1 demarcs and circuits over copper.

With the CopperLink-T™ extenders, zero configuration is required. Simply take them out of the box, put them on either side of the dry copper pair, connect your T1 or E1 device and the circuit will light up immediately!